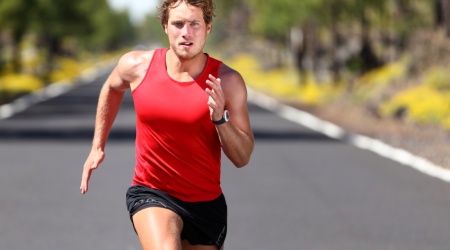 Today my middle brother Adrian is contributing to my blog with a life-giving and life-saving story.  Enjoy!
~Vince

There’s a picture that I have from many years ago. But it tells me so much about who I am today.

In that picture, I’m standing beside my younger brother, Michael, who is standing beside our older brother, Vince. We’re all dressed in athletic clothing, standing in the middle of a soccer pitch near my parent’s home in Guelph. We all look happy. But so much of this day I don’t remember. It was over twenty years ago. What I do remember is hazy, like a dream that you’ve just woken up from but can’t put all the pieces together.

What I do know is that we’ve all just run in a race. Vince won. That I remember for sure. I can’t remember where I finished. I don’t even remember that I’m wearing a hat, or why it’s turned sideways. What I know for certain, though, is that I was happy that day. Satisfied. Because I had just done the thing that made me most happy: I had run, and I loved running.

It seems that I’ve always had an affinity for going fast. After all, I walked before I crawled and was running soon after. I would run to catch up to my older brother and his buddies. I would run to get away from my younger brother. I would run to deliver my paper route. As a young boy, I actually remember figuring out that my Dad was manipulating me when he said, “go on, I’ll time you,” but I’d still do it. I just loved to run. For me, it was the freest and the purest and the fastest thing in the world. 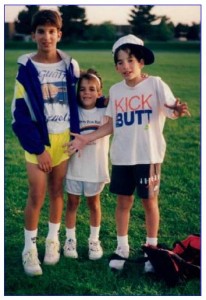 When I got older, my running took on a more competitive form. I joined a track team. I trained. Hard. And I was soon the best distance runner in my elementary school and then (aside from my older brother) the best in my high school, too. Back then, our running was important to us. It was what we did. It was in our blood, actually. Our father had been a competitive distance runner—a scholarship runner!—and so I imagine we all inherited his love for running and racing. My Dad would take my brothers and I to track practice three times each week, and then we would run the neighbourhood streets and country roads on all the other days. And then, at the races, we would do so well. I would train for hours and hours and hours for a five minute race. But the exhilaration of actually winning one of those races, of running a time I had never run before, or of out kicking a competitor who I really wanted to beat kept me running.

But it was more than just winning. It was that my running gave me confidence. Although I have always been awkward socially, my running always took away my anxieties: anxieties about not fitting in at school, anxieties about wearing glasses, anxieties about always talking too loudly at the wrong moment. With running, though, I was free. I remember arriving at a race in my running clothes. I actually had running clothes: spandex and short shorts and even special shoes for racing. And I remember walking around with such confidence that this was perhaps the one place where I didn’t have to try to fit in. I knew who I was when I ran: strong, confident, and so often, victorious.

I look at the picture of me and I see that confidence. I see a young man posing somewhat arrogantly for the camera. His hat is turned nonchalantly to the side, the world seems to be within his comfortably stretched arms, and he was absolutely secure forgoing his usual running shorts (my brothers evidently did not) for a pair of baggier basketball shorts. I have a vivid memory of pulling on those shorts (just on that day) and thinking, “I can wear what I want; I’m already a runner!” The hat, the hands, the shorts, and even the look in my eyes show that I wasn’t afraid to be who I was, to be comfortable in my own shoes. And running (races) has always been that place for me. It was the place where I could simply be me: somewhat proud, somewhat asinine, but always poised to take on the race in front of me.

And that young man is who I still am today. Without a doubt. I am confident, I can be arrogant, and sometimes my intensity can present as conceit. The challenge, though, is that the world doesn’t always look friendly at someone who puts him or herself out there. Because over the years, being who I wanted to be sometimes conflicted with what others wanted me to be.

The world I’ve lived seemed to ask me to tone things down. I’m not exactly sure when this started to happen, but I have several memories of people (sometimes physically) cringing when I spoke up, too loudly, or expressed an opinion that clearly wasn’t popular. I remember having peers in high school make comments that made me feel like I wanted to go home and change immediately even though my clothing choices were far less risky than a hat-turned-side-ways. I vividly remember trying to answer intelligently on my first day of graduate school and being told by the professor (in front of everyone!) that I was just completely wrong. I can still taste the thoughts I silently spoke to myself that I would never raise my hand again. And each and every time I put myself out there and got shot down, I felt that I was supposed to change. I felt that I ought to speak less, dress differently, just try not to be so awkward. And if I could do that then maybe I would become the same, confident man I exuded in that photo.

The reality, though, is that you can only be the person someone else wants you to be for so long. Eventually, you have to just stand in your own shoes and be fine with how they fit. Because the kid in that photo twenty years ago is the same thirty-one year old man I am today, regardless of some of the feedback I’ve gotten. The only difference is that back then I didn’t apologize for who I was. I took confidence in what gave me value—my running—and that confidence became a metaphor for all the insecurities in the other parts of my life.

Looking back on my picture, then, I realize that running will always be deeply imbedded in who I was, who I am, and who I will become. It has taught me—maybe even made me—self-disciplined, perseverant, and perhaps even a little too arrogant. But that’s who I am because of it, and that’s how I ought to live as a response to it.

5 thoughts on “The Long Distance Runner”