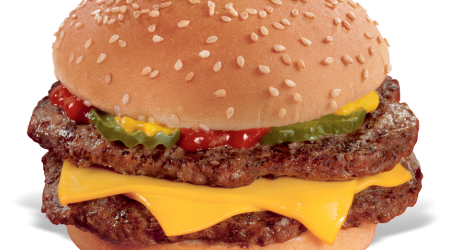 Incredibly, there are still some people out there saying that the best way to bulk up is to eat everything in sight. If you believe them, you really need to read this!

If you’ve been following me for any period of time, you should know by now that you can’t expect to put on any appreciable muscle mass without a diet that’s optimized for muscle building. If your diet is light on the right nutrients, you’re not only not going to succeed in bulking up, you’re at risk of losing some of that hard-earned muscle mass you already have.

That last is the fear that drives many new bodybuilders to fall for the “see-food” diet. Those diets tell you to just eat everything you can get your hands on, sometimes for months, with the promise that you’ll get big. Well, if fat is the kind of big you’re looking for, maybe. But not for muscle building competition.

It saddens me when I see a young guy with great potential ruin his physique by following such a diet. Some honestly believe the hype that tells them that excessive eating will make their muscles grow. How can anyone believe that chicken wings and jelly donuts will build muscle like brown rice, fish and whole eggs?

It’s common practice for competitive bodybuilders to transition from mass-building programs off season to super-strict fat-loss programs before a contest. Their goal is to bulk up as much as possible, avoiding workouts that will affect 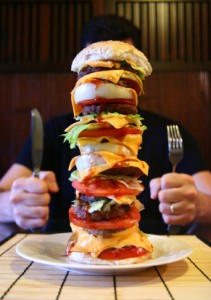 their weight gain. They follow that with an intense fat-loss program, to get as ripped as possible for the show, increasing cardio, upping their activity and restricting calories.

This can work, and the approach isn’t uncommon when people first get started in bodybuilding competition. But it can go south on you when these massive weight fluctuations become as regular as the seasons and last just as long.

So if you’re buying pallets of junk-food, planning a months-long gorge-a-thon, you may want to finish reading this before you fire up the forklift. Here are five major problems with that method that you should be aware of, if you’re serious about bulking up.

Mistake #1 – You Just Get Fatter

We learned something from Christian Thibaudeau, muscle building and strength coach: “You can add size or volume to a structure either by making the existing components bigger (hypertrophy), or by increasing the number of components (hyperplasia).”

When you see hypertrophy, you may think he’s talking about muscle tissue, but he’s talking about fat. Adipocytes (fat cells) are a little like tiny bags to store fat. The more you put in them, the bigger they get. But they can only hold just so much. Your body’s not going to let a little thing like that stop it from storing energy, though. If you keep overeating for a long enough time, it’ll just make more adipocytes to handle the excess storage needs.

And that’s the problem! When you have more fat cells, it’s easier for your body to store fat. And those extra fat cells you got from all those binge-eating drills are like diamonds…. they’re forever. You never get rid of them. So when you let your body increase the number of fat cells, you’re actually making it harder to lose fat and easier to put more fat on.

That’s why adipocyte hyperplasia makes it tough for fatter people to lose fat and stay slim, while lean people may have an easier time of staying slim. Those all-you-can-eat bulking approaches can put all your hard work at risk.

Have you ever noticed that while most gym enthusiasts look pretty much the same all the time, physique competitors seem to get more muscular year after year? That’s because the competitors are lowering their body fat – getting ripped – every time they head to the stage. Every time they go through that cycle, their body gets better at nutrient partitioning, the process of forcing nutrients to muscle tissue rather than to fat cells.

When your caloric intake is excessive, the calories can go to either muscle or fat. When you’re calorie deficient, the necessary energy can be drawn from either muscle or fat, too. If you have good partitioning and a high metabolic rate, your body will be able to easily draw energy from fat cells and direct it to muscle cells. And over time, serious competitors can develop insulin sensitivity, which means that their systems get very efficient at storing the nutrients they consume in the muscles, either as glycogen or as muscle tissue, or in the liver, as glycogen. They also become less prone to store nutrients as body fat.

For a long time, there’s been a rule of thumb in fitness that when your body fat is in the 10-15% range, you tend to gain the most muscle, whereas in excess of 15%, you will gain more fat and less muscle. Research tends to support this. In the 1980s, Forbes published a study, showing a logarithmic relation between fat gain and lean body mass gain. The LBM gain or loss depends on how much body fat exists initially, in humans and other species. This Forbes Theory is still widely accepted today.

Mistake #3 – You Can’t Force the Muscles to Grow

Muscles grow in spurts. It doesn’t matter how much you might wish it was, it’s just not a non-stop process. And if you try to force them to grow, they’ll fight back with plateaus, over-training, injuries and burnout.

You may know someone that’s suffered some of those problems from forced training before. The same sort of problems can arise from trying to force-feed your muscles into growing, too. Overloading them with calories might work for a very short time, but eventually, you’ll experience excessive fat, poor health, bad habits and a ruined physique.

Lee Hayward and I developed the 21-Day Fast Mass training cycle in order to help avoid those problems via variety and unique muscle stimulation. It also maximizes muscle growth by taking advantage of natural anabolic growth and recover cycles.

Forgive me if this sounds obvious, but it needs to be said again and again: You have to work with your body, not against it! If you try to fight it, believe me, you’ll lose.

Mistake #4 – Cutting Gets Harder Every Time You Bulk

In my personal experience, you might get away with a traditional bulk/cutting cycle a few times in your lifetime. But the longer you train and the more experienced you become, you’ll eventually hit the point that overshooting your desired ripped look will become more and more difficult.

Remember that a person’s protein intake, testosterone level, testosterone to cortisol ratio, genetics, insulin sensitivity, muscle fiber breakdown and many other factors are only capable of producing just so much muscle tissue.

For instance, let’s say that your first bulk was from 150 to 200 pounds, after which you cut. If it was your first such cycle, the majority of those 50 pounds was probably lean muscle and you only had to cut 10 pounds or so of fat. That’s easy. Most of your gains are muscle, so your thyroid hormone will probably be well charged up. That’s how my first transformation went.

You can see the problem, right? As you have to spend more time cutting, you have less time bulking, which means less overall muscle mass. On top of that, the longer you cut, the more likely you are to start losing muscle mass due to your caloric deficiency. That’s the last thing you want!

Mistake #5 – Bulking Can be Impractical and Overwhelming

Bulking for 4-6 months is a bear! It’s a daunting and impractical process. People can’t commit to the grocery bills, the meal prep time, the cooking time and the constant eating. It seems like they’re spending their entire waking life on just food. So pretty soon, they take shortcuts and eat what’s easy. They might see some decent gains in muscle at first, but pretty soon they hit a plateau and start storing fat.

The answer is fairly simple: Don’t go for huge gains. Set smaller goals that you can commit to, and in the long run, you’ll make faster gains.

5 thoughts on “5 Common Mistakes When Trying to Bulk Up”