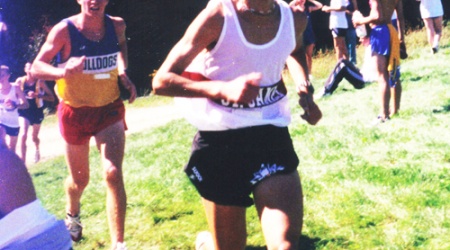 A few months ago I did an interview with my buddy Sean and he asked me some really good questions about what it was like being “Skinny Vinny” during my high school days and I agreed to take you on a stroll down memory lane to give you an idea that I know exactly what it’s like to feel like a scrawny, weak, pip-squeak…. enjoy… if you think you’re the only way who hates being skinny, average and going unnoticed… wait till you read some stories I’ve NEVER revealed online ever before…

Sean: You were once a 149-pound, skinny and underweight long distance runner. What was your life like back then? Did it always bother you being so scrawny?

Vince: Even though I found my identity in running I remember one particular incident after a soccer tournament in Niagara Falls that put me in tears. After a game in 35 degree heat, all the guys took their shirts off and that was the first time I became self conscious about my body and realized my arms resembled spaghetti noodles.  Some of the guys had “pipes” and all I had was “pipe cleaners.”

I went back to my Nonna’s to shower (I was too embarrassed to shower with the other guys) and starred at my forearm in disgust, which resembled a twig, and I literally started screaming at God and yelling, “Why did you make me so skinny?  I hate my arms!”  I actually started crying by myself.

Sean: Wow…did it get any better as high school went on?

Vince: By the end of my high school days I found my identity in the success that my triathlon and running career brought me so I was learning to deal with the “skinny guy” comments.  Although I can vividly remember feeling like that guy who always went “unnoticed” when the shirt came off at co-ed pool parties, shirt and skins soccer games, wearing tight clothes at the bars, vacations at the beach and showering after gym class.  I can always remember seeing a muscular or ripped guy and think, “Jeez, he must pick up lots of girls…”  It was safe to say that I HATED being that average guy in the room that no one noticed..

Vince: I remember when I was in grade 10, no joke, the hottest girl (I mean SMOKING hot) was sitting in front of me in class and turned around and asked me to arm wrestle my buddy.  Since I went to catholic high school we wore dress shirts so I had no idea that my buddy had 16 inch arms in grade 10!  He was on the wrestling team and was one of those genetic muscle freaks who became a high school wrestling champ. To that point in my life, I never knew it was possible for a male teenager to have arms that big, especially since most of my friends were scrawny long distance runners.  Mine weighed in at a full 12.5 inches and I knew I was going to be humiliated but accepted the challenge.  That was pretty stupid of me because as soon as we locked up I felt like my hand was put in a vice grip and I instantly thought, “My gawd… this guy is a going to break my arm!”  Within about half a second my buddy cranked my arm so fast to the desk that I wished I had the power to disappear and become invisible for ever.  All I could do was turn red, I was so embarrassed.  Not only was I pathetically scrawny but I had zero strength.  That experience was so humiliating, that to even this day, I am always hesitant to arm wrestle (even if I know I can take them) to avoid that horrifying moment.

To top off the story, the hottest girl in school just burst out laughing and said to me, “Vince, you would be so hot if you were as big as Chris (my buddies name).  You have nice hair and great eyes but you have to put some weight on your arms.” It’s amazing how vividly I remember that story…

Sean: No kidding… so I take it that you didn’t have a big dating life in high school?

Vince: I only had one girl friend all through high school and it wasn’t until my last year which is when my running career was going really well and my confidence was sky high (and she was 2 grades lower than me…I was too scared of the girls my own age).   I noticed a direct relation to how confident I was and when I would talk to girls.  After a big championship race when my name was announced during the morning announcements, I would have more confidence and I would make more attempts at talking to girls I thought were hot or even cute.  I totally believe that the more muscular guys in high school got more girls, not because of their bodies, but because they were more confident in themselves so they could be themselves which made them naturally attractive. They were also confident in approaching more girls and the more girls you talk to the better your chances of one of them liking you back.   I will never regret my running days but I often wonder, “What would it have been like if I went through high school super buff, ripped and muscular?”  Imagine being that guy that all the guys were jealous of and the girls drooled over?  What would it be like to be the high school stud?   I guess I’ll never know…

Vince:  I remember when my friends started going to “bush parties” (when high schooler’s steal their parents alcohol and meet in some deserted field or forest to party with all the cool kids) and downtown to the bars, I became very self conscious about the clothes I wore.  I remember going to Bootlegger (the cool and expensive clothing store at the time) and buying these tight fitted “euro” shirts that hugged your entire body (kind of like Under Armour clothes) and standing in front of my Mom’s mirror for 15-20 minutes examining my buddy and how it looked from different angles. I would try 4-5 different shirts of the similar style until I found the one that made my body look as big as possible.  I became very jealous of the guys who could wear plain t-shirts or any kind of clothing because their muscular physiques made any kind of clothes look good.

Sean: Anything embarrassing that you hope other skinny guys could avoid?

Vince:  Yes… one last memory I’ll share for now (I have MANY more).  I remember going to “Tony’s Billards,” which was where a lot of guys in high school would go on weekends to shoot pool.  This pool hall was surrounded with mirrors so I got into a habit of checking myself out in the mirror (when I didn’t think anyone was looking) to see how my arms looked in my euro fitted shirts.  One time I was squeezing the pool cue in a attempt to see some definition in my arms and one my buddies caught me and just burst out laughing and went on to tell a few more guys who thought it was equally funny and the story soon spread up and down the hall ways on Monday morning at school. My buddy went on to nickname me “Heart Throb Vinny D” which was the last thing I felt like!

Sean: I’m sure you could go on, lets talk more about your University days in the next interview.  Any final comments to anyone reading?

I’m not sure if you can relate to my story but if you’re skinny, I don’t care how friggin weak or scrawny you are, I can relate to you and I know how it feels.

That is why you should listen to me.  Stop listening to Jay Cutler and Ronnie Coleman.  Those guys don’t have a clue of what it’s like to be you.  Stop reading those bodybuilding websites and magazines that are covered with guys who use steroids and are just trying to sell you supplements and “drug program” workouts.

They don’t care about you either and they don’t have your best interests at heart.  They just want you to buy into their lies and rip you off over and over.

I am dead serious.  Stop listening to anyone and everyone who can not relate to your problem.  Why would you take advice from anyone who has zero clue what it’s like to have bad genetics, a fast metabolism or long limbs?  They did not have to overcome the same obstacles as you so in my opinion, they are not the most credible source of information for you… Would you take money advice from a guy who won the lottery?  So why take bodybuilding advice from a guy who has amazing genetics?

Listen to me and do what I tell you.  If you’re sick and tired of being skinny and want to become super buff, ripped and muscular and have girls drooling over you and make guys jealous of you start following my muscle building program and you’ll be able to hook up with any girl you want and you’ll get more respect from your buddies that they’ll start asking you for advice.

Don’t miss out on the opportunities that I did…. life is too short to be skinny and average – order my muscle building program NOW.

15 thoughts on “The High School Days Of “Skinny Vinny””