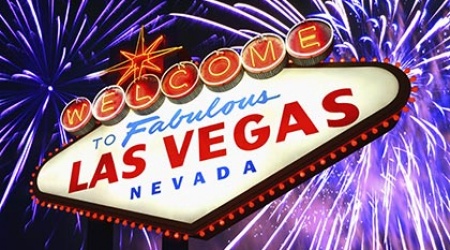 This past weekend I went to Las Vegas for business and pleasure. I think you’ll really enjoy re living and re learning through insights I collected and experiences I had. Leave me a comment below.

1. Show me your friends and I’ll show you your future. This past weekend Jay Cutler passed on the Mr. Olympia title to his best friend – Phil Heath.  That’s right, it was a showdown between master and student. Phil told the story of how he met Jay at a bodybuilding show when he was 190 lbs and Jay was 290 lbs!  Jay took Phil under his wing and mentored him to become his greatest threat and competitor. They both recognized each other has best friends. Jay displayed the most class and humbleness I’ve ever seen an athlete display.  He told the crowd, “If I was going to pass my title onto anyone, I would want it to be my best friend Phil.”  The crowd was captivated on every word.  Phil returned the kind words and expressed his gratitude to God, his wife, Jay, his sponsors and fans.  I was very proud to be apart of this event and to witness the honorable traits both these guys demonstrated. It’s good to see that pro bodybuilding is being lead by first class guys like Jay and Phil.  If you can find the speeches online, they are worth re watching.

2. Kyle Leon is The Man! In light of, “Show me your friends and I’ll show you your future,” my partner in crime this weekend was my really good friend, Kyle Leon, creator of The Muscle Maximizer, which has become the top selling muscle building book in 2011. I have held that “claim to fame” since 2006 and Kyle came out with a brilliant program this year that has helped 1000’s of skinny guys pack on lean muscle mass via his customized solution.  Many people don’t know that Kyle and I have been friends since high school and are key contributors to each others business success.  As of right now, Kyle and I have sold more muscle building programs  than any other muscle author in existence and it’s not a coincidence we know each other. We are not threatened by each other, like Jay was not threatened by Phil. We realize we’re better working together than against each other.  I encourage you to look for healthy partnerships in your life because the people you hang around the most will influence the decisions you make and the future you create. Whether you want to rise in fitness or business or life, choose your friends wisely. 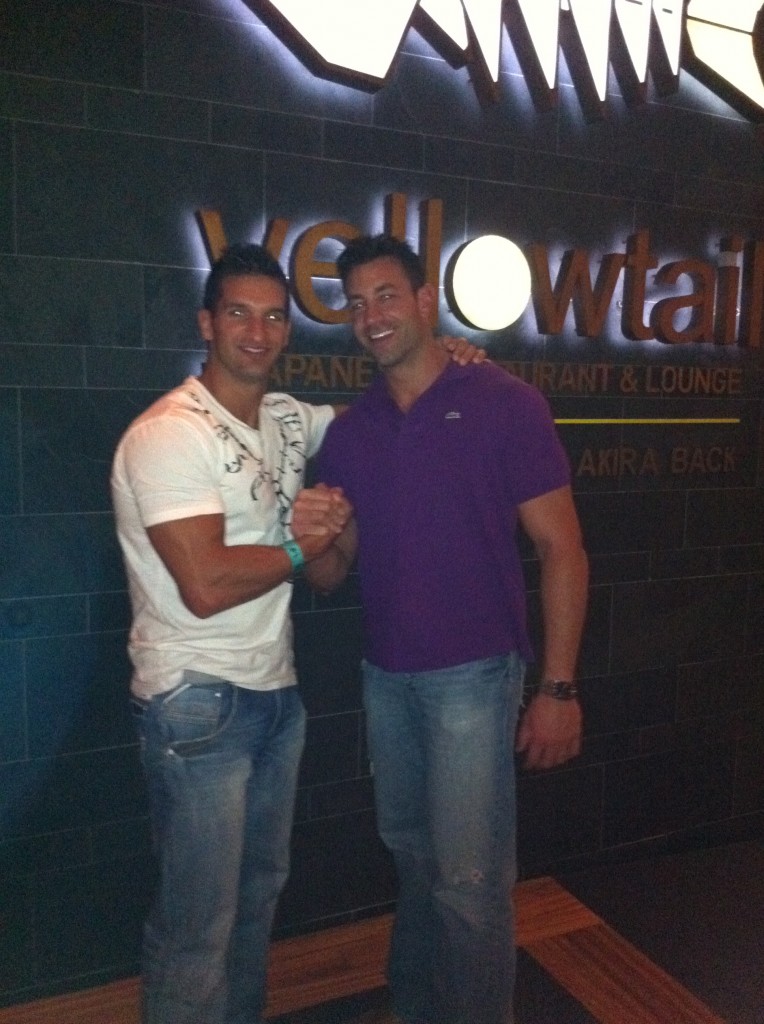 3. The best way to mange “calorie damage” is to plan a photo shoot on the first day you arrive. I shot with “The King Of Covers” – Jason Ellis, a few hours after landing. After 3 weeks of low calories your body is ready to experience The Anabolic Amplifier Effect. All the 21 Day Fast Mass Building boys know what I’m talking about!  I have not seen the pics yet but I think they’ll land in a few mags!  Hopefully a cover…

4. Another great way to minimize “calorie damage” is “Mini Short Burst Circuit” workouts right before you head out for a 7 course dinner! By depleting a substantial amount of stored glycogen, we make room for the extra calories we’re about to consume in the form of beverages, appetizers, main courses, desserts and more beverages.  Kyle and I would sneak into the trendy little gym at the Cosmopolitan (high recommended by the way) while our ladies were getting dolled up for the evening.  Kyle and I shot a mini video on this topic from the gym – stay tuned for that.

5. The best time to plan a vacation is after a stretch of personal accomplishments.  This has been a tough year on my body. FOUR shows in one year!  That was A LOT of dieting and A LOT of discipline.  I can’t describe how good nachos and wings taste after not eating them for NINE MONTHS!  Imagine eating a slice of pizza after MONTHS AND MONTHS of no pizza?  Your love and appreciation for food is completely different.

6.  The best burger in Las Vegas, “as of right now”, is the “Gold Standard” at Holsteins in the Cosmo.  I went there three times during my trip and ordered almost every burger on the menu (with a side of a Drunken Monkey milkshake…. so good). Super high quality beef that created a party in my mouth!

7. I have even more confidence in Lee Hayward and I’s, 21 Day Fast Mass Building program.  Many of the top bodybuilders, who competed in the Olympia, were training AFTER the show.  Potential for anabolic activity is highest for up to 2 weeks after a period of caloric deprivation.  Your opportunity for lean muscle gains (no fat) are greatest after you diet for an extended period of time.  That’s the premise of 21 Day FMB and the pros have kept this secret to themselves for years.  You can bet that I’ll be in the gym – hardcore – the next few weeks growing!

8. Vinnie Favorito is ruthless. I got absolutely ripped on by comedian Vinnie Favorito at his stand up comedy show.  My jaw was aching from laugher. My side still hurts. This guy was devastatingly funny!  Although, his content is VERY VERY rude, before you go search him on Google.  He picks on the entire crowd for 90 minutes.  He asked Flavia, “Who’s the pretty girl?”  And I blurted out, “That’s my wife…” in fear he was going to say something rude…  And for the next 5 minutes he just ripped on me for being an insecure, loud mouth, protective, jealous husband…I started moving in my seat and he says, “What are you getting up to fight me tough guy?”  He also said, “Wow… that’s your wife? What do you want to do? Put a cape on her and fly her around the room?”  He also said, “He you might look good from the front, but I saw your side profile… Not so good…”   I would love to post the audio but there is too much swearing.  It was an experience I’ll never forget. 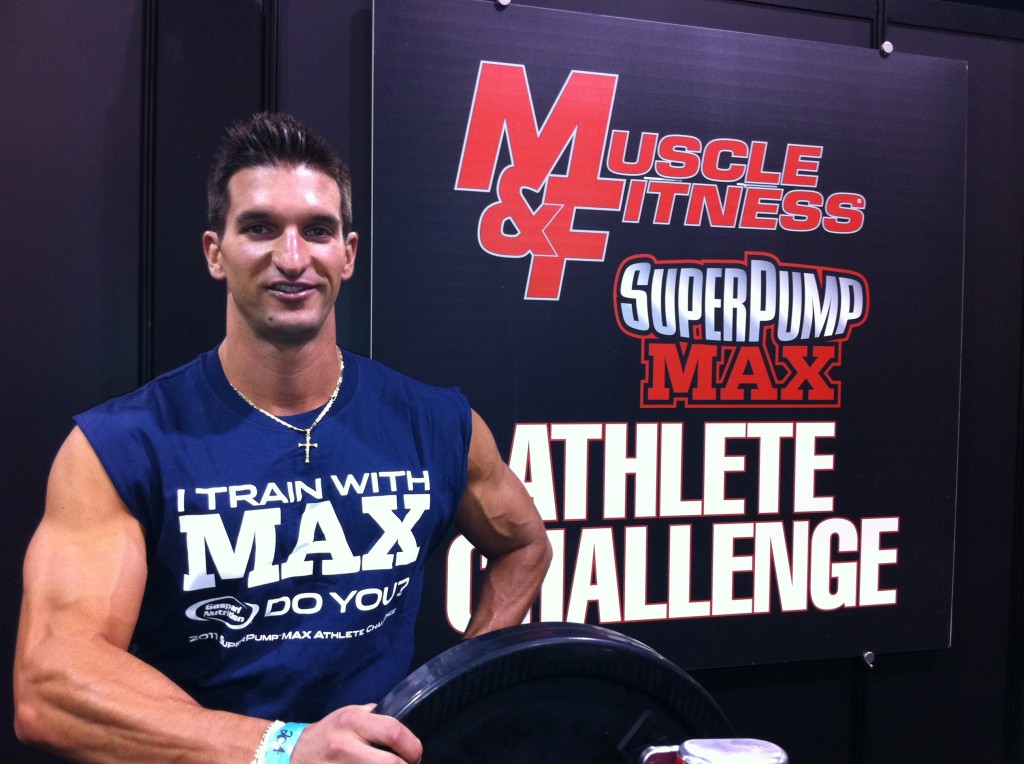 I was told the Top 10 came back for the Physique Round on the Saturday and I was in 5th after 10 guys so I figured I was not going to be top 10 so I blew my diet the rest of the day only to find out Saturday morning I WAS competing in the Physique Round which was disappointing because I consumed a lot of sodium the night before causing me to wash out (meaning my abs were not defined or dry).  I jumped on stage anyways – you’ll see that I don’t look razor sharp but I didn’t look bad overall.  I met a lot of great guys back stage and was really impressed to how fast and smooth they ran the show.  It was 10x more organized than my WBFF show and the quality of competitors was equally high even though this was an open show. For $100, if you’re in Vegas next year,  you should do it.  Maybe I’ll do it again too…

The thing with these shows is you get very little out of it. The winner MAYBE gets a photo shoot with Muscle&Fitness but if I want that I can shoot with the right photographer on my own and have him submit my pics. I don’t need to do a show. The show is just fun, an opportunity to meet some other guys and walk around the Expo with a “Competitor” badge which gets you a lot of stares.  I always tell guys, “Decide on your OWN reasons for competing… ” I see so many guys cry like babies and go home disappointed after shows and I think, “Did you just come here to win?”  You need your own reasons for competing because these judging sports can be disheartening.  I’m not sure how I placed overall… I’m guessing top 15 or top 20 at worse. I’ll be posting footage of the entire show in the Live Large membership site in a week or so.  Stay tuned!

So I’m back home in Canada, safe and sound. Let me know what highlight of mine resonated with you the most.

11 thoughts on “9 New Things I Learned In Vegas”