When you train your abs – kill them.

You’ll never get ripped-up and deep-cut abs relying on squats and deadlifts to “strengthen your core.”

I went against all convention and ended up with the best set of abs of my life.  Not only were my upper and lower abs popping but my external obliques and snakes looked shredded. 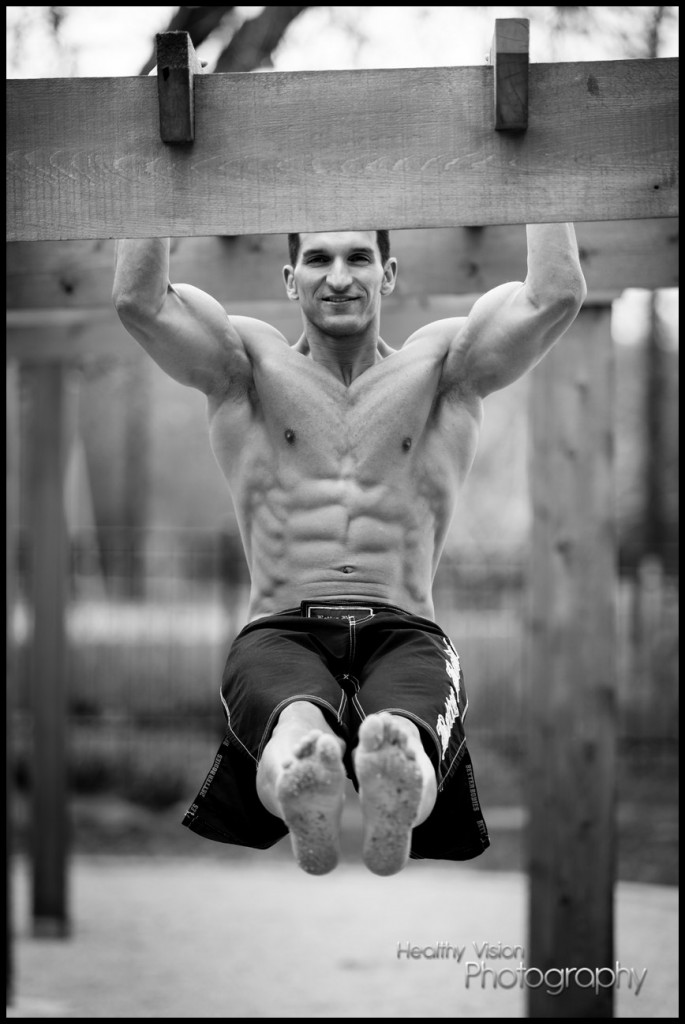 You don’t get abs like this relying on “heavy lifting to strengthen your core” and it wasn’t until I started doing HUNDREDS of reps with short rest periods and a variety of resistance that my abs started to pop.

1.  The Ideal Rest Period Between Exercises: Short and I mean very short.  Never rest longer than 15 seconds between exercises.  Abs are considered postural muscles, used primarily to keep you standing upright.  That’s why they recover so much more quickly than other muscle groups.  That allows you to keep the rest periods between exercises short – no more than 15 seconds.  The bonus of this is that you burn more calories which leads to accelerated fat burning to showcase your hard work sooner.

2. The Ideal Rest Period Between Sets: One minute or less.  Just enough to let your heart rate come back into a “talking zone” and then kill em again.

3. How To Structure Your Hardcore Ab Program: Use giant sets (three or four exercises for the same muscle group performed without resting between sets) are the best way to boost intensity, which means more fat burning and less overall gym time.   Over the course of the week I’ll rotate between two different series of giant sets.  Too much variety is not good and can backfire on you. It’s critical that you get stronger and last longer with each exercise.

4. The Optimal Training Frequency For Abs: At least six times a week. If you’re not there yet, scale up.  You’re never going to have razor sharp abs hitting them three or four times a week.  Come on, use some common sense. If three or four times a week was optimal than you wouldn’t be reading this because I bet that’s what you’ve already doing. Stop being lazy and stop making excuses for why you should not train them more frequently.  Some people say that abs need 48 hours to recover and I believe that’s applies to beginners only.  Train them every day and rotate between different exercises every other day.

5. The Best Rep Range For Abs: It should vary, just like every other muscle group.  For resistance style exercises I start with lower reps and scale up to higher reps.  With bodyweight style exercises I start with higher reps and scale down to lower reps by adding resistance.  Abs is a muscle group I rarely count reps on.  Depending on the exercise it’ll range from 8-10 reps, 10-20 reps, 20-30 reps and some sets I do 50-100 reps.  Stop being afraid of big numbers.

6. The Optimal Speed For Abs: I like to alternate between slow and controlled and fast and explosive.  Often times I start most exercises off with a slow and controlled tempo and then pick it up with momentum to squeeze out extra reps near the end.  To recruit the most muscle fibers in your abs and obliques it’s important to vary the movement speed.

7. A Typical Ab Workout Should Look Like This: Lower abs, obliques, upper abs and core.  Lower abs and obliques are often the weakest and least developed so start every workout while they are fresh and strong.  I don’t do a lot of core exercises but you can include them at the end.

8. Customize Your Ab Routine: It’s okay to break the rules when it comes to ab training. I learned this from my good friend Brock Aksoy who won the WBFF Fitness Atlantic Championships and became a WBFF Pro too.  We’re training partners and getting ready for the World’s together. Brock is big on customizing the routine to your physique. For example, if your obliques are invisible then do two exercises for that area.  For example, to bring up your obliques your ab routine might go like this: obliques, obliques, lower abs, upper abs, core.

9. Each Giant Set Should Be Balanced: If you don’t need custom-carved abs than be sure to include at least one exercise for every part of your abdominal region.  In a typical giant set you should have a lower ab, oblique and upper ab exercise.

Here is a sample workout with all the rules applied:

Got questions about designing a hardcore ab-training program?  Ask below!