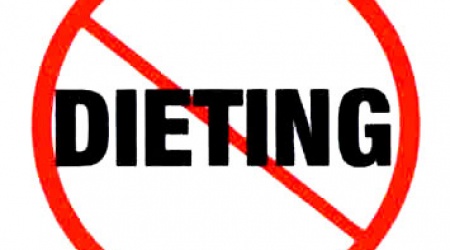 Have you ever wondered why diets stop working? Tell me if you’ve ever heard someone talk about their diet going something like this:

This is a common story from people who follow strict diets, and it fuels the fire about the ‘metabolic damage’ a diet can do.  And because of this everybody jumps on the “fix your metabolism” bandwagon, treating your metabolism like it’s a physical thing that can be broken or fixed (like the parts of a car).

This however does not happen because we know from scientific research that weight training while dieting preserves metabolic rate.

I decided to ask my buddy, Brad Pilon, who was recently on the Mike and Juliet show discussing this topic and his new book.

Brad went on national television and gave the scientific explanation of this phenomenon – the idea of metabolism slowing down to a point where massive caloric deficit doesn’t cause weight loss – is incorrect.

I decided to call him up because I had some questions of my own:

Brad: What we have here is a situation where something is obviously happening to affect weight loss progress, but the explanation for why it is happening is wrong.   People are under the false assumption about what is really causing their

Vince: I know lots of personal trainers who train bodybuilders and fitness models who experience a slow down in their fat loss as they get closer to contest time. From what you’re saying so far it sounds like people must sporadically increase the amount of calories they eat to keep the weight loss progressing because of metabolic slow down, is that right?

Brad: From all my experience and education, the metabolism is not slowing down. These trainers are obviously seeing this happen again and again with their clients so there is definitely something happening that is causing the slow down in weight loss, metabolic slow down is just the most common and in vogue thing to blame it on at the moment, however this is scientifically incorrect.

Vince: So what is going on?

Brad:  Whenever faced with a problem like this, I do what any good scientist would do, I investigate it. From my research, I knew that with Eat Stop Eat that metabolic rate wasn’t the culprit here. Your metabolism isn’t slowing down, and it’s not getting damaged, so something else must be going on.

So I dug deep into the research and by deep, I mean I went way back into the research.  What I uncovered is probably one of the biggest oversights in weight loss history, one that I think will absolutely revolutionize the way we view weight loss.  What I found was a very simple and well researched explanation to this phenomena and it doesn’t include anything nearly as complicated and mysterious as metabolic slow-downs or metabolic damage, or down-regulation of fat-burning enzymes.  The real answer has to do with the way your body handles water!

Vince: Water? But aren’t we talking about fat burning?

Brad: Yes, but the huge thing that is being overlooked is water. Let me explain. The largest component of your body is water. Water makes up between 45% and 75% of your body weight, just rough numbers, and the variability between 45% and 75% is primarily due to differences in body fat. Most tissues like muscles, skin, and your organs are all over 70% water, even adipose tissue, which is almost all fat, is still 10% to 14% water in healthy people.

Vince: Does this explain why people can lose body fat without losing weight?  Can body water be hiding the changes?

Brad: Yes, that is exactly what it means and that’s worth repeating. The retention of water has been observed to conceal the loss of body fat repeatedly throughout the course of obesity treatment.  As you lose fat from your fat cells, the fat being lost is replaced by a water-like fluid. As fat leaves your fat cells, it’s replaced by water.

Remember I told you that a typical person’s adipose is about 10% to 14% water? Well when we’re looking at people who are in a semi-starvation state, it could actually be much, much higher. And remember a strict bodybuilding competitive diet is very similar to the clinical definition of ‘semi starvation.
The key factor here is that your fat is being replaced by water in the areas where there was fat. This effect is hard to detect because this wouldn’t be noticeable using traditional methods of measuring body fat like skin fold calipers. It would take some pretty sophisticated measurement and tools to be able to see through these changes of where that water is being positioned. Again, this isn’t new research. If anything, this was lost research.

Vince: So while other areas of your body are shrinking, the amount of body water that you’re carrying isn’t shrinking?

Brad: Yes. It gets to a point where it starts to hide weight loss even though the body water isn’t going up, you’re body is getting smaller because your burning fat but you will get to a point where you aren’t losing any more water to go along with your fat loss; so your percentage of total body water might actually go up and it localizes itself where your fat used to be. Not a good thing. It also occurs very gradually.

Vince: Is there a scientific name for this phenomenon?

Brad: It’s known as dieter’s edema, or swelling.  Dieter’s edema usually starts after the first month of semi-starvation, (and like I said earlier, any strict weight loss diet is similar to semi starvation). At first the swelling is very transient, it comes in later in the day, and it’s gone by the morning. As semi-starvation continues, this edema becomes more apparent and more massive.  So the longer you diet, even when your weight loss starts to plateau, you’re still losing fat, but it’s being hidden by this edema (swelling).

Vince: That’s great that we finally have the answers to why this happens and we know it has nothing to do with some metabolic loss slowdown or malfunctioning enzymes, but it doesn’t change the fact that it happens.  If you’re someone who is trying to get a six pack and get really lean, how do you prevent this?  What are your options?

Brad: Well, first, as I told you, if you’re going to follow a traditional diet which is the same as clinical semi-starvation to get ultra-lean, it looks like you’re going to have to do periodic periods of re-feeding (eating more).  Because there’s not a lot of new research on this we really don’t know how long you have to re-feed for, but it seems like the effect is fairly quick. Once you start eating a larger amount of calories, your edema will quickly go away to the point where it looks like you’re starting to lose weight again.

Vince: And what is the option you suggest in your new book?

Brad: I suggest another option in my book, and this option comes from research published as early as 1890.

The research I dug up showed that a full-day fast did not result in edema. That’s right, while semi-starvation causes dieter’s edema, total starvation or fasting, does not.

So you could use the ESE protocol of flexible intermittent fasting and weight training and you would not get dieter’s edema. What you’re essentially doing here is periods of complete starvation (fasting is a better word), which doesn’t cause dieter’s edema, followed by periods of re-feedings. Even if, for some weird, crazy reason, you did get a little bit of edema, it would go away very quickly with this system.

So ESE solved the dieters edema problem even before I knew the problem existed. The Eat Stop Eat lifestyle is meant to be used as an easy and effective weight loss strategy but it ended up fixing this other major problem with dieting too. I guess I kinda lucked out on that one!

Brad: Do you understand why diuretics, steroids, weight loss supplements, cutting carbs, avoiding creatine monohydrate (before a contest) and caffeine are so popular in the bodybuilding and fitness world?

Vince: Yes and it appears that body water is a poorly understood area of human physiology when it comes down to weight loss or specifically changing the way you look. There’s not much research on it lately, but it’s an area that we know is something we have to pay special attention to when we’re trying to get very lean.

So there you have it. If you’re following a traditional diet, you’re probably gonna need periods of sporadic higher calories if you see a slow down in your weight loss.

If you just ditch the traditional diet, and follow ESE using periods of fasting combined with periods of normal eating you can ensure that you will never suffer from dieter’s edema.

15 thoughts on “Why Diets Stop Working”