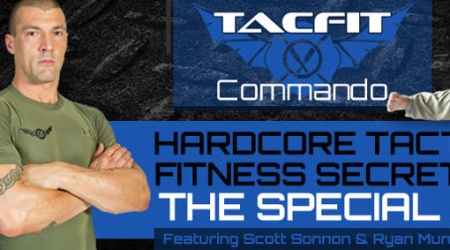 Today  I would like to introduce you to my new friend Scott Sonnon.

Scott’s background includes overcoming childhood disabilities, winning the former Soviet Union’s most coveted athletic distinction: Honorable Master of Sport. He’s an international champion in Russian Sambo and Chinese Sanshou.  He fights again, at 40, for USA at the 2010 World Games in Jiujitsu. Not a household name, Scott is the “go-to” guy for secret service and counter-terrorism such as the Israeli LOTAR special forces and the Italian Prime Minister’s personal bodyguard unit.

He’s contributed some brand new and unique information that I know you’re going to LOVE.  Post your questions for us after reading.

by Scott Sonnon, Master of Sport and Mike Locke, Master of Exercise Science

I fought in my first World Games 17 years ago, and I lost the gold to my Russian counter-part. Silver may seem like precious metal to some, but I was defeated so effortlessly I didn’t even deserve to be on the mat with my opponent — though I’d been putting in 6-8 hours of training per day!

I refused to quit, because submitting would have meant losing more team points for the USA. In the Russian national fighting competition of SAMBO, if you don’t tap, you get snapped — and so I fought the rest of the match with a broken arm.

I lost, but I learned a great lesson: you’ve gotta step outside the box of conventional training if you want an edge.

Everyone knows that sport was a political platform during the Cold War, and the Russians spent a lot of money to be the best. The “fringe sciences” of the former Soviet Union did dabble in the Big Pharma of performance enhancing substances, but their dedicated research also uncovered some real gems and developed superhuman athletes.

Through years of petitioning, I became the first American to formally intern in the Soviet Union “think tank” of special forces trainers, Olympic coaches and Cosmonaut medical researchers. And I brought back radical new concepts for my teams in the West, and of course, for my own vindication.

The 2010 World Martial Art Games will be held in Las Vegas in September, and at 40 years old, I will represent the USA one final time. I’m exploiting all the training technologies that defeated me almost 20 years ago, but this time against fighters half my age.

I’ve used these approaches to win international championships in Russian Sambo submission fighting and in Chinese Sanshou kickboxing, but in Vegas I’m fighting under a totally new set of rules: Sport Jiujitsu.

With Vince’s support, and very much in line with the superb principles he presents in his outstanding Maximize Your Muscle program, I’d like to share with you how I intend to take gold for my country and vindicate myself of that decades-old loss.

We all have gaping holes in our strength. We’re like a sieve training to hold water. We leak force and hemorrhage power everywhere, because we’re weak in the angles we don’t train.

Let’s take a moment to question some conventional training wisdom, and then I’ll present you with an exciting alternative.

Traditional training concepts focus on trying to isolate specific muscle groups to achieve strength increases, gain muscle mass, or build muscular endurance. This isn’t the most effective way, because it doesn’t reflect how the body hangs together.

If you look at the science behind how the human body actually functions, you’ll immediately see that it’s impossible for the body’s musculoskeletal system to work in isolation. There’s no such thing as isolation, because movement is systemic throughout the entire body. Muscles, tendons, ligaments, fascia, and bone work together to create movement through multiple degrees.

Want to slap muscle on your bones in the fastest way possible, and without harmful drugs? The best way to do that is by creating a natural “anabolic environment” to promote muscle growth.

You can use this principle to stress the entire system by exercising different angles of movement. You’ll gain strength through each angle of course, but you’ll also stimulate massive growth as well.

We’ve put decades of research into this approach, and we’ve used it to prepare thousands of troops for the field. Those years of experience gave us the ability to crunch the formula very quickly. But you can still approximate some of the science if you take the time to examine how the body moves and then create exercises that hit multiple angles and degrees of motion.

No matter what conventional strength training tells you, we’re not one-dimensional and we were never meant to move in straight lines. We’re three-dimensional beings that operate through multiple angles, and our training must reflect that.

It isn’t as simple as that of course, and program design can get complicated. Movements can be stressed individually or can be coupled with their compensatory opposite: i.e. each push angle complemented with the same pull angle. On top of that, we also manipulate load, duration, volume, angle, grip, and modality to obtain the desired result.

Too much information? Don’t sweat it!

You don’t have to spend years studying the biomechanics behind this principle. We’re giving you a sample approach using movements you already know, so you can get your swole on right now.

One more point about program design: it’s critical to incorporate angle-, modality-, and difficulty-appropriate progressions. It isn’t enough to stimulate the system. You must also create an environment of achievable success.

Each program design must be challenging, safe, and effective. That’s why we begin with simple, general, gross movements that over time become complex, specific and refined.

The sample program at the end of this article is very basic. You want to start with skills you already know, so you can drop it in tomorrow and immediately hit high intensity. But it isn’t enough to just repeat the same workout week after week, pushing deeper into boredom and burnout. As you get better at the skills, you’ll increase the complexity of the movements and keep the challenge factor high.

The load must be appropriate for an exercise to be effective and, more importantly, the technique must be sound.

Load and technique work in harmony. Solid technique will give you the greatest benefit. As your exercise technique improves and you develop that motor pattern, you’re able to achieve even greater muscle growth from the same exercise. It’s because you’re capable of working deeper into that exercise, making it even more effective.

The formula is elegant. It’s simple but not easy. It’s locked and loaded with research and experience so my team and I don’t have to think about what to do next. We just follow the formula and get the results.

You’ll see incredible gains from the sample program below. And you’ll crave more.

With greater understanding comes greater benefit. Follow along with the formula we lay out in the complete TACFIT Mass Assault program, and you’ll gain more muscle with each step you take along the four phases of progress. 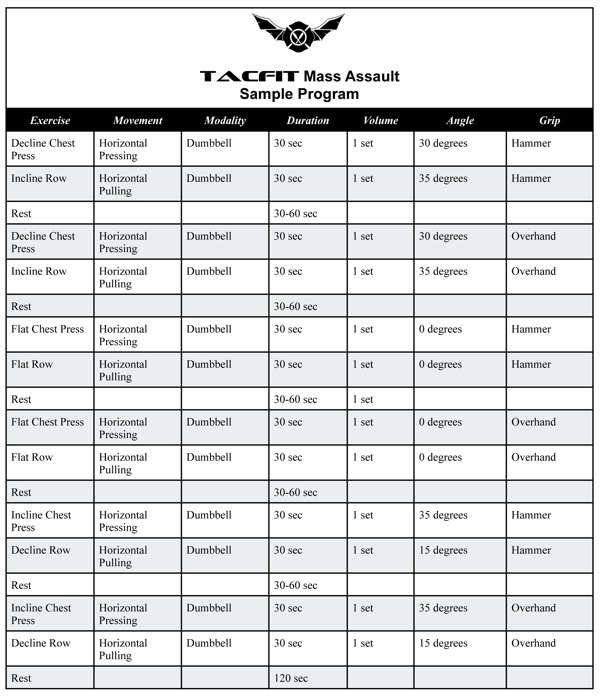 TACFIT® is a registered mark of Sconik International, LLC