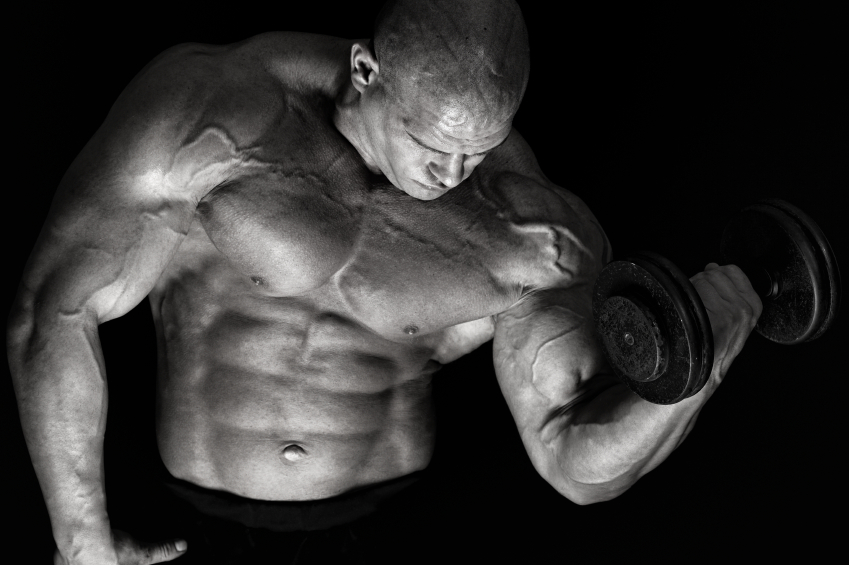 Where a lot of people go wrong in their pursuit to build muscle is that they are listening to the wrong people: the bodybuilders!

Happen to land here without reading the first three parts of this series? Click for Part 01, Part 02 & Part 03. If you’re already caught up, let’s get started…

The nuts and bolts of what you must understand…

Thus far in this strength miniseries we’ve gone over how strength can very often be a limiting factor in the pursuit of increased explosiveness (AKA power), and how increasing strength can improve one’s capacity to sustain force output over time by way of reducing the relative demand of a given activity. In this fourth and final installment, my mission is to highlight to importance that strength plays in muscular development.

If you recall the first installment of this series, I talked about the ‘load X time under tension’ equation, and how most people fail to fully understand the importance of both, ‘load’ AND ‘time under tension’. I think where a lot of people go wrong in their pursuit to build muscle is that they are listening to the wrong people: the bodybuilders! Well logically it does ‘make sense’ to ask those who have built the greatest amounts of muscle mass about their training, in actuality it can be very deceiving.

Aside from the question of drugs and super-human genetics, the problem with asking bodybuilders about building muscle is that their answers are almost always misinterpreted – they generally preach light weight, time under tension, and chasing the ‘pump’, while shying away from lifting heavy because of the wear and tear on the joints, and increased risk for injury. So what ends up happening is people start lifting light weights, pumping away endlessly for hours on end, with loads that are far too light to stimulate any sort of real world size. And what a lot of people fail to understand is that when bodybuilders say ‘light’, they mean light for them because they can handle seriously heavy loads if they wanted to. ‘Light’ is a relative term! Don’t believe me? Watch this video:

Light for someone with a 500 lb. bench is anywhere between 300 lbs. and 400 lbs, 60% and 80% respectively of their max, and the real problem here is that guys with a 135 lb. bench end up pumping away with two quarters on the bar (95 lbs.), chasing the pump in an attempt to stimulate growth. I hate to be the bearer of bad news, but if 95 lbs. was going to build a thick barrel chest, we’d all have accomplished that years ago!

Let’s go one further and talk about ‘dem guns’ – that same guy pumping away with 95 lbs. on the bench because Mr. Olympia ‘lifts light’ is almost certainly banging out curls with an even lower absolute load – probably somewhere between 15-20 lbs. dumbell curls. Once again, if 20 lb. curls were going to build a set of sleeve popping arms, it would’ve happened long ago. This isn’t to say that these loads don’t have a purpose somewhere in a strength training routine, but that they should not be cornerstones to which a routine is built around.

Does this mean that bodybuilders are lying to us? Not at all. They are correct in many ways to preach the pump, and the light weights that facilitate constant tension to be applied as it is obviously an effective way to build muscle based on their results. What they fail to mention is that strength is the foundation upon which all that size was built in the first place.

Pick a bodybuilder, any one – Phil Heath, Jay Cutler, Dexter Jackson, or anyone else currently competing on the pro circuit. Thanks to YouTube you can search your favorite bodybuilder and find countless vids of them training, and if you do, what you’ll likely notice is that even the guys who aren’t known for their strength are still lifting really heavy weights, even if they say they are light.

Take for example Phil Heath – a few years ago before Phil was ever a Mr. Olympia Champion, he posted a video of him performing incline dumbell presses for 22 reps (link provided below). Now, you’d think a weight that can be lifted for 22 reps would be light, right? I mean, if you can press a weight 22 times, it can’t be that heavy can it? Well, it was – the weight of the dumbells in the video were 150 lbs. each! So while bodybuilders do lift ‘light’, they lift light in relation to what they are capable of.

This is just one example; there are many others. Pick a bodybuilder, or pick an exercise that you want to see a bodybuilder performing, and you’d be hard pressed to find videos in which there aren’t several plates loaded onto the bar, or machine. If it’s a cable exercise like pulldowns, rows, or pressdowns, you’ll likely see almost the entire stack being used every time. The common denominator here is that a lot of weight is being lifted, even if more could be lifted.

So where does this leave you? Well, if you’re like me, it leaves you under the impression that if you want to gain some serious size, you better start lifting some heavier weights. Before focusing on popular bodybuilding techniques, devote time and effort to getting your numbers up. When you can deadlift more than 400 lbs. is when banging out high rep sets with a ‘light’ weight will put size on your frame. When you’re consistently benching over 300 lbs. you can get away with more ‘pump’ work.

Time Under Tension Means Nothing If…

This isn’t to suggest that there is a direct relationship between strength and size, but rather that the stronger you are, the greater your capacity to build muscle becomes¹. Strength heightens your size ceiling because it allows you to use greater loads when performing your time under tension work. I said it before, and I’ll say it again – time under tension means nothing if the load is too light. Time under tension alone is just one half of the equation, and without ‘load’ (and a heavy one at that), the end result is limited.

Once an appreciable amount of strength has been developed, there’s no need to keep going (unless of course, you like the results and want to keep getting stronger). But you’ve got to get there first. Bodybuilders all realized this early on, and many have even transitioned from power lifting backgrounds – most notably Ronnie Coleman, along with Johnnie Jackson, and John Meadows. They built their physique upon a foundation of some serious strength, and it laid the groundwork for them to really put on a ton of muscle because the amount of weight they were lifting left the body with no choice but to grow.

I’ll Leave You With This

What’s your take on training for size? Have anything else to share? Let me know in the comments below!