Strength is of primary importance regardless of the goal and today we’ll compare the role of strength in power development, and vice versa.

The nuts and bolts of what you must understand…

In the first part of this miniseries I built a case about the importance of being strong in a relatively vague way. In Parts 2, 3, and 4, I’m going to compare strength to other physical characteristics to help further cement the point that strength, up to a point, is of primary importance regardless of the goal. So let’s compare the role of strength in power development, and vice versa.

Power can be defined as the ability to generate maximum force in minimal time – in fact, the equation for ‘power’ is: force X distance/time (force times distance, divided by time). In this case the ‘force’ is measured in terms of the amount of weight on the bar – therefore, by this definition, the faster a given load travels from one point to another, the greater expression of ‘power.’

But Who Needs Power Anyway?

Well, based on the components of the equation, anyone who relies on their ability to move from one point to another, in as short a time as possible, needs to be powerful. Since power is a reflection of the rate in which one can produce a substantial amount of force – also termed the ‘rate of force development,’ those who need to be able to accelerate, or create momentum, also need to be powerful.

What about those who want to build muscle? Well, they benefit from being powerful as the ability to demonstrate power is dependent on motor unit activation, which is the result of the coordinated effort between the nervous system and the muscular system. The more motor units that are recruited and the faster they are recruited, the greater force production potential there is, and this is developed in direct proportion to increasing power. Since muscular development is also dependent on motor unit activation/stimulation (if a motor unit is not recruited, it is not trained), increasing power can increase the capacity to stimulate growth.

Even those who are training to reduce their body fat can benefit from the type of training geared toward increasing power, as explosive efforts have the most positive downstream effects on insulin sensitivity. Basically, the types of explosive lifting included in the training geared towards increasing power promotes the body to send more nutrients to muscle tissue and less to fat cells! If the fat cells are more sensitive to insulin, for the same amount of caloric consumption, you’ll gain more fat and less muscle – so, obviously for someone training for fat loss, the goal is to tip the scale in favor of muscle insulin sensitivity as much as possible, and explosive lifting will do that better than any other kind of lifting.

Understanding Power, And The Role Of Strength In Power Development
To better understand power, and the role strength has in power development, let’s break down the power equation above into its simplest terms:

Force: measured in terms of how much weight is on the bar – this will vary depending on the load selected in relation to the individual’s strength levels.

Distance: measured in terms of how far the bar travels in relation to the beginning and end range of motion – this variable is ‘fixed’ and remains constant.

Time: measured in seconds, or milliseconds, starting and ending in direct proportion to the range of motion of the lift – this will also vary depending on the load selected in relation to the individual’s strength levels.

Since we can’t practically measure how much force is being applied – all we know is the force must be greater than the amount of weight on the bar in order for it to be lifted in the first place, we measure it in terms of how much weight is on the bar. We then use the distance in which the bar travels and divide it by the length of time in which it travels to come to a conclusion of how many units of power were produced.

Using this equation, we can conclude that there are two ways in which an increase in power can be expressed:

Generally, when training to develop power, you want to select a load that allows for the heaviest load to be used without negatively compromising the amount of time it takes to complete the lift – since these are the two variables that can fluctuate.

The heavier the weight is, the slower it will be lifted, and the longer it will take to travel regardless of the distance between the beginning of the range of motion and the end.

The lighter the weight is, the faster it can be lifted, and the less time it can take to travel the same distance. There is a point however where the tradeoff in reducing the weight simply doesn’t allow for the weight to be lifted any faster. For example: 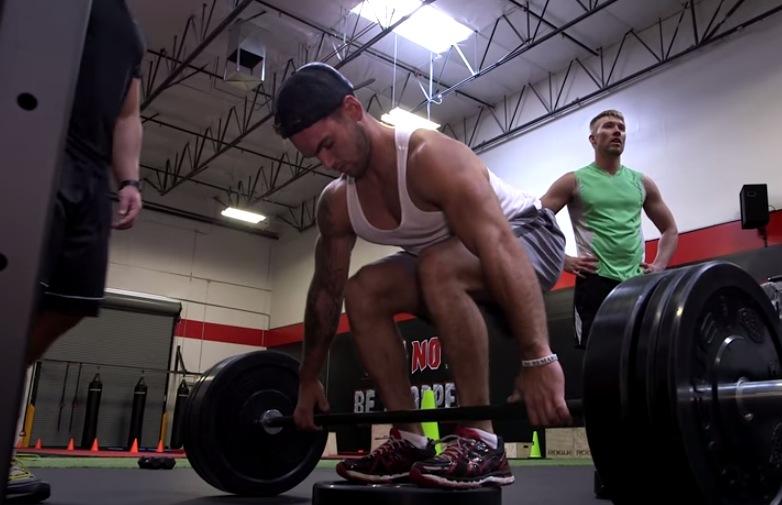 The length from where the bar rests on the floor to where it rests at the top of the movement will be nearly identical every single time. With a squat or bench press, it’s possible to manipulate your body to alter the range of motion a lot more than a deadlift in which the bar starts on the floor, and is held at arm’s length in an upright position upon completion of the lift.

Let’s also say that the range of motion between where the bar rests on the floor and arm’s length in an upright position is two feet.

Now, let’s say that a true one-rep max for a lift that covers a broad range of motion like the deadlift, will take three seconds to complete. If we plug these numbers into the equation we get:

It’s important to note that power is an arbitrary term used for illustrative purposes in this context. By no means do these numbers reflect exactly how long it would take someone with a 405 lb. max deadlift through a full range of motion, assuming their full range was exactly two feet. This is strictly for demonstration purposes.

Moving on, let’s say that a 10% reduction in weight results in a one second reduction in time. If we plug these numbers into the equation we get:

Let’s continue on, but I’m going to skip a few steps by removing the equations (since you now have an idea of how they go), and simply provide the answers:

If we continue on with reducing the weight to 40% and then 30%, and so on, what happens is that the units of power would begin to decline because at some point it’s simply not possible to lift any faster. Remember, to develop power, the ideal load is that which is the heaviest load you can handle without negatively compromising the amount of time it takes to complete the lift. Since you can only lift so fast, anything lower than what you can lift with maximal speed will result in less power being expressed. For argument’s sake, here’s what 40% would look like (under the impression that the speed in which a full range lift is capped at roughly 0.5 seconds):

So how does strength tie into this whole thing? Well, think about it – in the hypothetical example above, we used 405 lbs as our max. And in our example we concluded that the best loads for developing power were between the 50-80% range, which in this case would be 202.5-324 lbs. But what if the individual in question needed more power for some reason? Since using loads below 50%, or above 80% in this case will not yield the greatest response in terms of expressing power, what options would there be?

Well, let’s take a moment to think about what would happen if the individual increased their deadlift by 100 lbs. Would doing so lend itself to an increased capacity to develop power? Of course it would, because if we are limited to the 50-80% range of our max, increasing our max would mean that the loads that fall under the 50-80% are greater! And this is how strength can be a limiting factor in terms of power development, because the more you can lift, the greater the loads you can use that fit within the range best suited for increasing power.

At the end of the day, those training for increased power can become limited by the strength levels, and by increasing their strength levels, they increase their capacity to further develop power. When viewed through this scope, it’s easy to understand how strength serves as the foundation upon which power can be built.

What’s your take on power? Have anything else to share?
Let me know in the comments below!