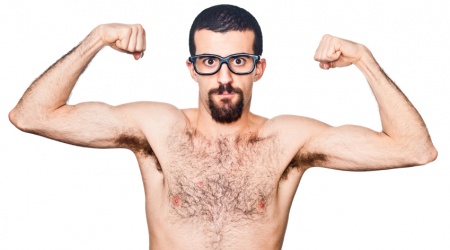 
“We hold these truths to be self evident, that all skinny guys are created equal, that they are endowed by their Creator with the ability to eat peanut butter and jelly sandwiches by the hundreds without seeing gains in body fat.”

As honest as ole Abroham was, he got that one wrong.

All skinny guys are not created equal. Some, like myself, are what you’d call skinny-fat. Clothed, a skinny-fat guy could very well pass for a standard skinny-guy. Unclothed, a skinny-fat guy reveals a unique body: an under-muscled frame with body fat chunked in obscure places—lower chest, lower abs, and love handle region being the usual suspects.

This whole fat aspect of skinny-fat is what you’d call a hitch in the get-a-long. Typical skinny guys looking to gain muscle seek to shove sufficient sustenance down the chute, but a skinny-fat sufferer swallows a different fate.

The creation of skinny-fat

The root of skinny-fat is skinny, and most skinny-fat guys start that way. But a conglomeration of nutrition, lifestyle, and genetic factors creates unwanted fat cells. Fat cells are nasty buggers. Once formed, they don’t really disintegrate. They shrink, but are filled back up just as easily. So any time a skinny-fat guy chows down in the name of muscle building, it’s not uncommon for the fat cells to take the nourishing caloric goodness away from the muscles. End result: a seemingly impossible quest for muscle, and a seemingly inevitable addition of body fat.

Where a typical skinny guy can eat, eat, and then eat some more, a skinny-fat guy must proceed with caution. Indeed, all skinny­ is not created equal.

The conglomeration nutrition-lifestyle-genetic cocktail that creates skinny-fat syndrome creates a physiology and hormone profile better suited for a menopausal female. Sadly, we can’t control genetics. But there is hope, as we can control environment—what we are exposed to, how we handle situations, and how we eat.

So if you are skinny-fat, there’s no sense wallowing over genetics. Instead, focus on controllable environmental variables like the five listed below. Each one is controllable, and keeping you (or potentially making you) skinny-fat.

Skinny-fat sufferers usually don’t know what to eat. What’s good? What’s bad? And as such, the first glaring reason for skinny-fatness comes from what (and how much) you decide to digest.

Nutrition is kind of a big deal. The biggest reason why being that an abundance of calories is a creator or fat cells. But simply saying eating too much is a little too crude.

Perhaps a bigger issue than how much is where—where are the calories coming from? It’s legitimately tough to consistently over eat on wholesome foods, and it’s no coincidence that skinny-fat sufferers often reach for overly processed foods, like chips, candy, cake, and crackers. An even greater faux pas is drinking a ton of calories through sweetened beverages, like sweet teas, soda, and other sugary madness.

If you’re eating pancakes and drinking chocolate milk for breakfast, you have work to do.

Answering emails from loyal readers (most of which are skinny-fat sufferers) is a common daily happening for me. More often than not, the conversation goes something like this:

Reader: Hey I’m skinny-fat, and I can’t get rid of this pouch. I’ve tried everything! What should I do?

Me: Before we get anywhere, do you strength train?

So let’s talk about muscle. Part of being skinny-fat is…well…being skinny. Make no mistake, muscular fat people take on an entirely different look. In fact, muscular people can usually get away with more body fat. Why?

Muscle gives shape. And shape is what skinny-fat suffers crave, as they live their entire lives out of proportion. The mirror reveals a chunked up waist, narrow shoulders, and a rather unimposing frame.

If you want a graphic example of the relative unimportance of sub-surface fat to a good build, take a look at photos of the ultimate in man’s inhumanity to man—the survivors of the Nazi concentration camps of the Second World War.

Those pitiful people, whose existence shocked and sickened the civilized world, have as little fat as a human being could have and still cling to life. They had, admittedly, very little muscular development, but even the starving remnants of their muscular structure didn’t show through the skin to any great degree.

Good definition is affected by your sub-surface fat. There’s no doubt about that. But it’s also affected by the size, shape, and condition of the muscles underneath.

No muscle means no shape, which means that losing fat will only further reveal the embarrassing and unimposing frame underneath of the skinny-fat flab. The less muscle you have, the bigger deal every last ounce of fat is. 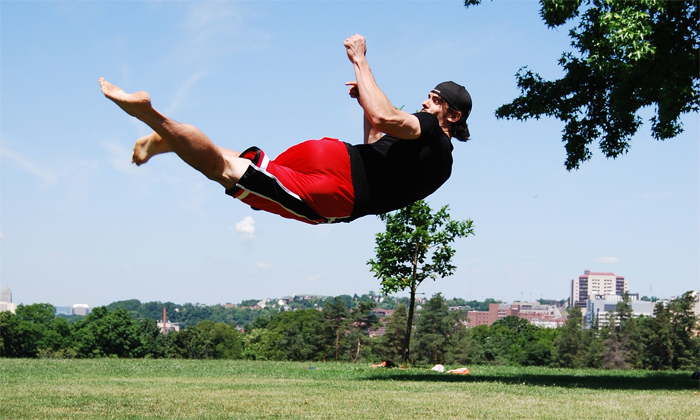 3. Stressing out without stressing down

Earlier, I mentioned genetics and physiology, both of which influence the concentration of hormones in the body. If there were any magic behind skinny-fat syndrome, it’d be hormones. Hormones are the one of the ultimate controllers in the body, and they influence not only the simple storage of body fat, but also where body fat is stored.

Those with an overabundance of stress tend to have whacky hormones, a relationship that brings us to the nervous system.

Part of sympathetic activity is breaking down the body. If you see a bear in the woods (a surefire way to activate the sympathetic nervous system), the body breaks its energy stores down for immediate use. Nothing else matters at this point except escaping death, so the breakdown continues as needed.

Those with a high level of sympathetic activation (from stress) are always breaking down. They’re never letting their parasympathetic nervous system kick in and encourage recovery. This makes muscle building and general recovery from training tough.

I call those with a lot of stress idlers, as they function much like an idling car. They may be “on,” but they aren’t going anywhere. Idlers never give their body a chance to “shut down,” rest, and recover—a necessary part of training and muscle building.

Skinny-fat suffers often feel the need to do everything in the name of fat loss. (There’s nothing wrong with focusing on fat loss. I actually recommend it at first, provided it’s done correctly.) They adopt a unique mindset: if there’s a calorie to be burned, it will be burned.

This usually lead to the oh-so mainstream idea that fat loss equates to running long distances (more calories burned = better). Sadly, most “mortals” running marathons are skinny-fat! (Partly because they aren’t strength training, and partly because excessively long aerobic training is like idling. Combine these two things with a junky western diet, and you’re looking at a stubborn fat gaining cocktail.)

And then maybe there’s high intensity interval training thrown in there too. And then maybe even training with weights to build muscle. After all, it’s all about burning calories. The more the better.

Although burning calories is nice, this process is more than just calories. It’s about signaling.

In other words, how is your body interpreting what you’re telling it? Most people try telling it too many things. They send too many signals, which creates a lot of static noise.

But the body’s ability to adapt is finite. Send too many signals, and the body doesn’t know which way to go. It might dabble in all of them. But it has to pick and choose. It has to filter a lot of noise. And anytime you’re filtering noise, the primary signal isn’t as strong or as “clear” as it can be.

So if you strength train, that’s one signal. If that’s all you do, the body can put close to 100% effort in recovering and adapting from strength training.

Throw in a bunch of long distance running, and then your adaptation reserves are now split. Maybe 60% muscle building, 40% aerobic. Now you add high intensity interval training, and you’re split in three. And, worst of all, if you’re an idler, you’re then split in four.

If there’s less pie to go around, any one person won’t be as filled.

You’ve probably heard of the dreaded “starvation mode.” Starvation mode is a term used to describe what happens to those that decide to go chronically low on calories intake with the rationale that by not eating, the body will have no choice but to use body fat as energy.

This is all good in theory, but I’ll once again throw this out there: While burning calories is nice, it’s more than just calories. It’s about signaling.

By going chronically low on calories, the body has no choice but to assume nutrients are at an absolute premium. Being a relatively smart creature, the body gets stingy with its current energy stores.

Chronically eating less writes your body a letter: Dear Body, there isn’t a lot of food out here. You won’t be getting much to eat, so use what you have to survive.

Contrary to your desires, the body doesn’t care about looking great naked. It just wants to survive. Being that nutrients are at a premium, it’s less likely to part with what it has.

Think of being in a gun fight and running out of bullets. The less bullets you have, the stingier you become with them. Another way to look at it: when you lose your job (lose income), those few extra bucks on morning coffee is a pretty big deal.

Knowing the errors is only half the battle. If you want to tackle skinny-fat syndrome, you have to not only know how to fix the errors, but also fix them in a way best suited to your unique body type. Remember: not all skinny is created equal. Be sure to be on the lookout for the second part of this article.

6 thoughts on “5 Things Keeping You Skinny-Fat”