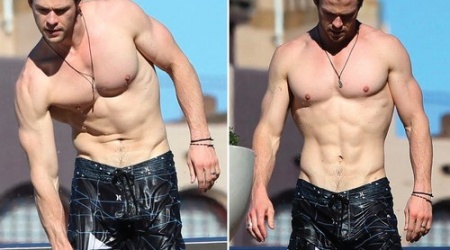 Have you ever wondered how Hollywood pip-squeaks transform into big screen powerhouses in what appears to be a matter of months? Or, if you’re a movie buff like me, maybe you’ve recently wondered about the following:

As I studied the workouts these actors followed, I did not discover any break-through training protocol or super fancy nutrition formula. The most common workout theme was brief, frequent, and intense workouts from a variety of training styles. Not much was noted about nutrition but I would assume that each meal was protein and vegetable based, with complex carbohydrates tailored around the individual’s metabolism and goal. If the actor was not gaining muscle weight, I would assume that extra tablespoons of healthy fats (like nuts and nut butters) were added to the diet. Overall, I noticed more lessons that are applicable to the majority of us, rather than the minority. I’ve summarized your take home lesson with each point:

Take home point: Put something at stake.  Join a transformation contest. Make a bet. Donate a certain amount of money to an organization you dislike the most if you don’t achieve your goal. Get some blood in the game.

Take home point: Set a deadline and announce it to people you don’t want to disappoint.

3. Actors can recover fasterthan individuals with commanding jobs or those striving for a degree. Actors are paid to know their lines and look the part so their day can revolve around training and eating. They can also take more frequent naps, a key tobody transformation. What a life!

Take home lesson: Plan your more aggressive training cycles during periods of the year when your work is less stressful.

4. Many actors who transform from sissy boys to superheroes are rather thin, carry very little muscle to start with and are blessed with faster-than-average metabolisms. This means they have a greater potential for change compared to an individual who has four years of intense training. If they were to start the same program at the same time, a beginner weightlifter will always gain more muscle than an advanced weightlifter. Beginners almost always gain twice as much muscle as experienced lifters in the same time period. This happens because their bodies tend to adapt and respond efficiently to a brand new stimulus since they are starting further from their genetic ceiling. The more your muscles are forced to adapt, the more they grow. Think Taylor Lautner.

Take home lesson: Don’t compare your results to others. Let your training age keep your progress in perspective.

5. Actors typically have a generous 12 to 16 weeks to build muscle and burn fat. Over a course of 16 weeks it’s not uncommon to burn at least 30 or more pounds of blubber to create the illusion they’ve gained 20 or more pounds of muscle if everything isdone effectively.

Take home lesson: Give yourself enough time to transform! Drop the “get rich quick” fitness mentality.

6. Most of our superheroes are not wearing a Speedo so they can prioritize their training to the muscle groups that give the illusion of size and power. For example, the upper clavicular area such as the upper chest, traps and shoulders gives the appearance of size and power. Other body parts that impress strength and confidence are biceps, upper back and ripped abs. So throughout our contest prep, these areas should be prioritized. Since the body has a limited capacity to adapt to stress, our actor’s recovery resources can be dedicated to these body parts of priority so that he will look more muscular in those desired areas. Although this is not an ideal long term plan, volume could be reduced in the lower body to set up the potential for more upper body mass.

Why is it so important to focus on the illusion muscles? Consider a fitness model show. Do you ever wonder why professional fitness models look so big on stage (or on covers) but when they stand beside you they resemble a rather average looking individual? It’s because most male fitness models have 31-32 inch waists (and weigh between 170-190 pounds) that create the illusion of broad shoulders. When competing at the 2011 WBFF World Championships I couldn’t compete with the top competitors because I have a 34 inch waist, making it harder for my shoulders to jump at you. In short, if I was casting for the next Hollywood action hero, I would cast an individual with a tiny waist.

Take home lesson: Dedicate periods of the year to your slow-to-grow body parts to improve your body’s symmetry and proportion.

7. Our superheroes are lean enough. I say enough because none of them are boasting body fat percentages (i.e. 4-5 percent) to grace a stage. That’s not necessary for our movie star’s role. Going much lower than 10 percent can lead to muscle loss, drop in performance and a gauntlook. My definition of lean is 10 percent body fat.  At six to nine percent you’re ripped. Atfive percent or less you’re shredded. So why 10 percent and not 13 percent?Enter The Lean Threshold, which applies to men and women but we’ll use a man for this example. The Lean Threshold suggests that at certain body fat levels a man will look the same. This means that if a man is 13-18 percent body fat then you will not be able to distinguish the difference. Ten percent body fat for a man is very lean. Eighteen percent or more of fat for a man is fat. If a man is under 10 percent fat or over 18 percent fat then you’ll clearly be able to tell if he’s “lean” or “fat.” Anything in between is very vague and it is very hard to notice the differences. So what does this mean for you? If you truly want your physique to stand out, you need to get out of the “vague” zone and dial in 10 percent body fat. The equivalent of 10 percent body fat for a male is about 15 percent fat for a female.

Take home lesson: Give yourself permission to be light. If your goal is to be 200 pounds but you look better at 190 pounds, who cares?

8. The Law of Specificity!  This law states that the specific nature of a training load produces its own specific response adaptations.  The training load must be specific to both the individual and to the demands of their chosen event.  In short, this concept basically enforces this: “You get what you train for.”  Another way to say this is: If you want to become a better boxer, box. If you want to become a better cyclist, cycle. If you want to look more like a power lifter, train like a power lifter. If you study Mark Wahlberg’s workout in prep for The Fighter you’ll see that his coach, Bo Cleary has him doing three-minute rounds of shadow boxing, punching the speedball, pad work, rope skipping and speed bag. Emulate Taylor Launter’s six-pack ab workout that personal trainer Jordan Yuam designed and you’ll be doing a lot of direct ab work like a freaky looking fitness model. Looking to become another gladiator in Spartacus? Get ready to spend four hours every day training like a gladiator: weapon moves, combat skills, circuit training, sprints and team games like tug-of-war. It’s neat to see how this group training reinforces a pack mentality, which is necessary to survive in the brutal Coliseum! The gladiators don’t train just for size and power but for agility, speed and strength and a mindset to win. In short, if you train like a gladiator, you’re going to look like a gladiator.

Take home lesson: Is your workout designed to help you in the field you’re in or achieve the look you’re after?

The biggest lesson we can learn is that actors know their end outcome whether it be a gladiator, boxer, superhero or tough guy. They have a crystal clear vision of how they must look, feel and perform, and their training is dedicated to that end outcome. They avoid goal high-jacking and program hopping and are able to dedicate themselves to the goal at hand which reminds us of the popular quote, “The best program is the one that you follow.”Now it’s your turn. Comments and questions are welcomed below. What was your big take home lesson?