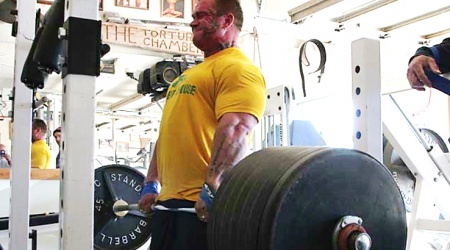 The Soviets were determined to beat the West at just about anything they could, including proving that their athletes were superior to ours in every possible way. To achieve that goal, the Soviets invested a lot of time and effort developing new training techniques to help their athletes build bigger, more powerful muscles. Some of them were kind of crazy and fell by the wayside but a few of them have stuck around and actually spread to the West. Periodization—particularly Linear Periodization—is one of the Soviet weight training techniques that did have staying power and was adopted by Western bodybuilders.

The premise of Linear Periodization is that training is broken down into blocks of time (periods) that focus on a specific goal or developing a particular skill set. The periods of Linear Periodization include: hypertrophy (size); strength, power and transition (restoration). In its basic form the model begins with a fairly high volume of low intensity lifting, gradually shifting towards a lower volume of high intensity lifting.

Linear Periodization is among the most popular weight training techniques in the United States. Unfortunately—thanks to some inherent shortcomings in its Western implementation—it’s just not all that effective. The biggest issue with it is that while you are focusing on achieving a particular goal  like size or strength, the other elements are being ignored. Essentially you have a situation where you are training to develop one particular capacity, but in the mean time, other capacities are being ‘detrained.’

For example, one phase centers on building muscle size (hypertrophy). During this stage, your training is focused on developing bigger muscles. However, in the subsequent two phases you focus on building strength and then power. Here, you lose all the size you just gained, leaving many guys to wonder, “What’s the point of working to build size if I’m only going to lose it in later phases?” That’s a good point and a valid question.

Fortunately, there is a better way—and it’s known as Concurrent Periodization (also known as Conjugate Periodization). The key difference between the two is that with Concurrent Periodization, you train to achieve different goals simultaneously, rather than one after the other. A key benefit of this approach is that while training to develop one capacity you’re not de-training another. In other words, you won’t be investing a lot of time training for bigger muscles only to see those gains disappear after a couple of weeks when you start training for strength or power.

With Concurrent Periodization you are simultaneously training to achieve four specific goals: 1) hypertrophy (size); 2) strength; 3) power; and 4) endurance.  This strategy forms the underlying foundation of the Lean Hybrid Muscle program. The biggest benefit of this approach is that it allows you to not only build a foundation of general fitness, muscle size and strength, but it also facilitates the burning of excess body fat without the loss of muscle mass.

With most other training approaches, fat loss strategies also result in the loss of precious lean muscle mass that you’ve worked so hard to gain. But that doesn’t happen with Lean Hybrid Muscle/Concurrent Periodization because you are linking multiple qualities (size, strength and endurance) but training them in the context of achieving an over-arching goal—simultaneously getting bigger, stronger and leaner.

Achieving these seemingly divergent goals simultaneously is possible because this training approach facilitates the development of a hybrid muscle fiber that is not only good for strength, but for endurance as well. Normal muscle fibers (type I or type II) are either built for strength or endurance—not really both. With Concurrent Periodization, instead of training for an extended time period to achieve a particular goal, the ‘phases’ are incorporated into a single workout or short time frames such as a day or two.

And to achieve the goal of burning body fat without losing muscle mass, strength or power, you incorporate resistance cardio, rather than just straight cardio such as jogging or biking—activities that not only burn fat, but muscle cells as well.

I want to make it clear that I’m not entirely dismissing the benefits of Linear Periodization. In fact, for specialized athletes with particular goals in mind, it can be ideal. But for those of us who want to develop multiple skill sets while simultaneously achieving different goals, Concurrent Periodization is the way to go.