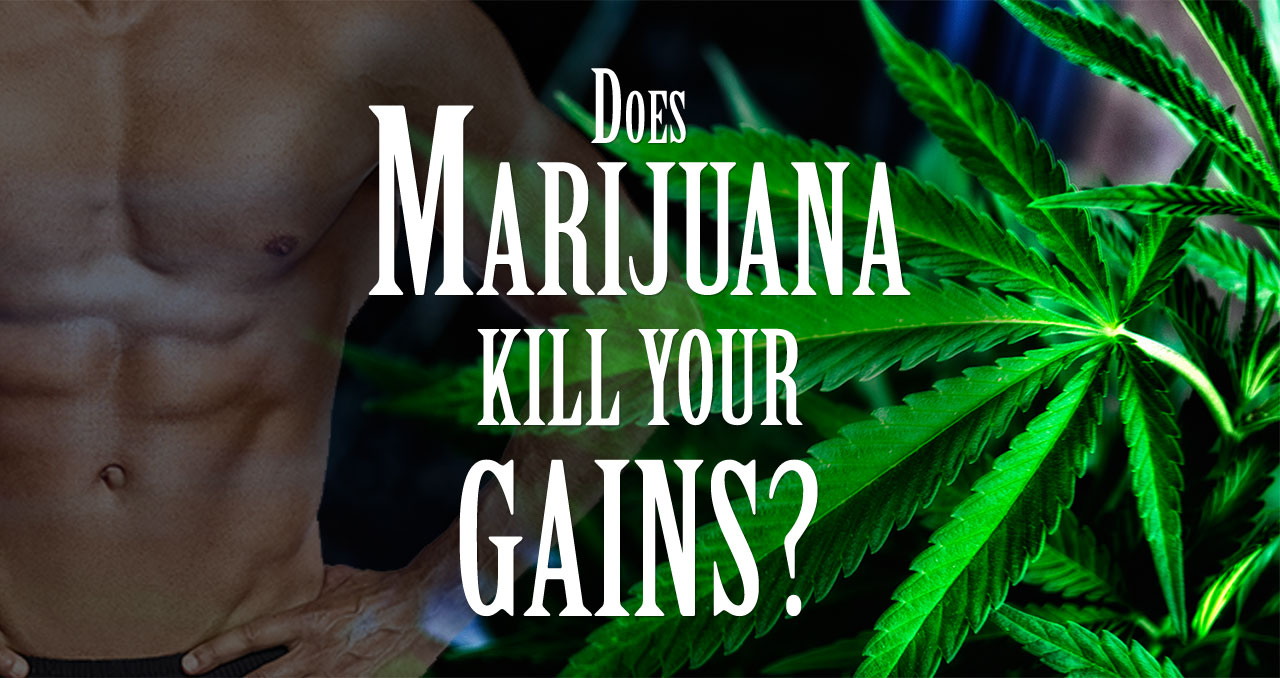 Most guys who are serious about building muscle spend a significant amount of time, energy, and money in the pursuit of mass. Dedicating all of these resources to making muscle gains makes many of us acutely aware of every single detail of our lives. Specifically, we give great consideration to how those details might influence our muscle-building success.

We carefully consider meal frequency, macro ratios, and supplementation. Still, even the most dedicated trainees like to cut loose from time to time. That said, when you dedicate a vast amount of your energy to building muscle, you want to be sure that your chosen method of cutting loose isn’t detracting from your primary purpose—being bigger than all your buddies.

While it might surprise some people, scrolling through any bodybuilding forum quickly reveals the popularity of marijuana use among lifters, united with the rallying cry, “Do you even inhale, bro?” All kidding aside, this is a topic that I get asked about all the time. Guys want to know whether marijuana is stunting—or will stunt—their muscle growth, and this article will explore that very question by considering marijuana’s potential effects on hormones, behavior, and cognition.

(Before we go any further I’d like to clarify that I don’t advocate any illegal activities. Marijuana use, as described in this article, should be construed as legal recreational or medical use.)

Researchers found that administration of THC (the chemical responsible for most of marijuana’s psychological effects) at a dose of 210 mg per day for 14 days resulted in a nearly threefold decrease in growth hormone response (1). When we consider that people with a low-to-medium tolerance generally experience the effects of marijuana with a THC dose in the range of 5-25 mg, and those with a very high tolerance typically require 80+ mg of THC (2), it becomes clear that these findings may not be applicable to the vast majority of users—210 mg per day is a massive dose.

With the information we have available to us, it seems reasonable to conclude that marijuana use does not have any significant impact on hormone levels, with one caveat—it would be prudent to avoid extremely high-dose THC usage in the interest of preserving normal growth hormone function.

Although marijuana use does not appear to influence hormone levels, we’re not out of the woods yet. We have to consider what effects marijuana has on overall behavior and cognition. After all, the things that we do (or don’t do) on a daily basis, and the way our brains process information, can certainly have a huge impact on our potential for success when it comes to building muscle.

From a behavioral perspective, marijuana seems to affect different people in different ways. While many people report a lack of motivation or energy (think: melting into the couch), others claim to be energized by the high. It should go without saying that, if marijuana makes you lazy, smoking (or otherwise ingesting) THC prior to a workout—or meal prep or any other important task—would be a bad idea. You might forget all about your plans and end up binge-watching “That ‘70s Show.”

On the other hand, if you feel like marijuana has no impact on your motivation, or even gives you a bit of an edge, by all means—toke it up. In a Men’s Journal article (7), elite triathlete Clifford Drusinsky reports that he eats a marijuana energy bar containing THC (at a dose of 20 mg) prior to each work out and says, “Marijuana relaxes me and allows me to go into a controlled, meditational place. When I get high, I train smarter and focus on form.”

Again, different people respond differently to marijuana, so if you’re thinking, “I can’t imagine getting high before I train; I might be relaxed but I highly doubt my form would improve,” you’re not alone. In fact, research suggests that marijuana impairs cognitive performance, including slowing reaction times (8). Further, impaired cognition can also be present the morning after use (i.e., marijuana use produces a hangover) (9).

Given that having a strong mind-muscle connection is generally accepted as critical for bodybuilding, impaired cognitive performance could certainly be detrimental. In addition, these data suggest that smoking prior to a workout, even if the workout is much later in the day (or even the next morning) has the potential to diminish the effectiveness of that workout. After all, if you’re not firing on all cylinders mentally, you may not be able to push yourself to the limit physically.

Any discussion of marijuana’s effects would be incomplete without mentioning the phenomenon known as “the munchies.” In essence, when you get high on marijuana, you get ravenously hungry and food just seems to taste better. While some people—especially chronic users—don’t necessarily experience the munchies, many users report these effects. And research confirms what virtually everyone familiar with marijuana already knows—marijuana does in fact stimulate appetite (10).

Depending on your current goal, the munchies could be good or bad. If you’re in a cutting phase, being ravenously hungry is far from ideal. On the other hand, during a mass-gaining phase, I’m sure we’ve all looked down at a plate of food in disgust at one time, wishing we didn’t have to take another bite. In circumstances like this, the munchies might be just what the doctor ordered!

Looking at all the information available to us, it’s difficult to say whether marijuana use, in and of itself, will significantly hinder muscle growth. The majority of the research suggests hormone levels are unaffected by even heavy, chronic use. Still, we must consider the potential behavioral and cognitive effects, which we know vary from person to person. As such, it’s each user’s responsibility to determine their specific response to the drug and make an informed decision.

We might reasonably assume that any psychoactive drug has definite potential to detract from performance. Under that assumption, we would conclude that total abstinence from such drugs produces the best results for achieving any goal, whether in fitness, business, relational, or otherwise. That being said—as I mentioned in the introduction—we’re all human, and many of us enjoy cutting loose from time to time. Total abstinence, for many, is unrealistic and unnecessary.

Alcohol is obviously an extremely popular drug, and many people use it to excess (i.e., get wasted). If you’ve ever gotten wasted, you know that alcohol has the potential to produce a very severe hangover that can derail even your best intentions. Yes, you had that really important workout scheduled, but it’s tough to do from the bathroom floor.

Marijuana, on the other hand, does produce a hangover effect, but there’s a big difference between having slower reactions and not being able to move from the bed (or couch, or that pesky bathroom floor). If, instead of getting drunk, you elected to get high on marijuana, you might be a bit lazy but at least you would still be able to function. In effect, choosing marijuana over alcohol might just save your gains by preventing you from missing workouts, not to mention the amount of calories many people consume over the course of a night of heavy drinking.

As I often say though, use your own experiences and the information you have available that’s relevant to you to draw your own conclusions. While it’s tempting to look at information in isolation—like the fact that Arnold Schwarzenegger, in the documentary “Pumping Iron”, famously said “Marijuana is not a drug…it’s a leaf,” then lit up—that doesn’t facilitate the self-experimentation process that ultimately leads to discovery and growth.

If you’re currently using marijuana regularly and you think it might be hurting your progress, test that theory! Record your progress for a month while you’re using, then abstain for a month and compare your results. Just make sure to minimize other variables (maintain a similar training and nutrition program and sleep pattern, for example) to ensure you’re making a valid comparison. And if you find it difficult to abstain, the jury is in and it’s likely that marijuana is indeed affecting your bodybuilding progress.

22 thoughts on “Does Marijuana Kill Your Gains?”